It’s been quite a few days (16, to be exact) since my last post… And , my hands have been itching to write a new post. But, fate had different ideas, and things just kept coming up, keeping me busy.

So, in the past few days, I have screwed up three tests, learnt PHP and lost Tug-Of-War to a team consisting of girls! Yeah, you read that right. The photo featured in BEP was our team of friends sweating out to save our ‘Ijjat’.  However, BOSM was great fun, and I tried my hand at Sports Photography, thanks to the efforts of Photog post holders who got us exclusive passes for clicking at BOSM. But, it seems that I need to click a lot more to be able to click the action. Maybe next BOSM, you’ll find my pics in issues of BEP and BHP :).

Also, I learnt that gOS will be releasing the next version of it’s OS, the gOS 3.0 gadgets, based on Ubuntu Hardy Heron. I just had to get the beta live cd downloaded, and, I tell you, gOS has gone back to it’s roots of simplicity. Though it still uses GNOME for the desktop, it also integrates LXDE in it very well, giving gOS the same feel as gOS 2.0 had. The Enlightenment 17 window/desktop manager was something that I missed a lot from gOS 2.9 (which was based on GNOME). gOS 3.0 also resets the focus on Google applications and now comes integrated with Picasa, Google Desktop, Gadgets, and the rest of the shebang that was seen last in 2.0. Also, Wine 1.0 is included in the OS. The simple look of LXDE is very reminiscent of the E17 and news has it that the final release of gOS Gadgets will come in flavours of LXDE, GNOME as well as E17. It’s due for this month. Keep a watch here for more information.

One more improvement has been the change in the Mac OS/X style dock from the earlier iBar to a newer wbar. It is less memory/processor intensive, and can also be downloaded and installed on a normal GNOME/KDE environment, just like I did. Here’s a preview of the wbar on my desktop. Do read the next edition of ACAD if you wish to install it on your Ubuntu. 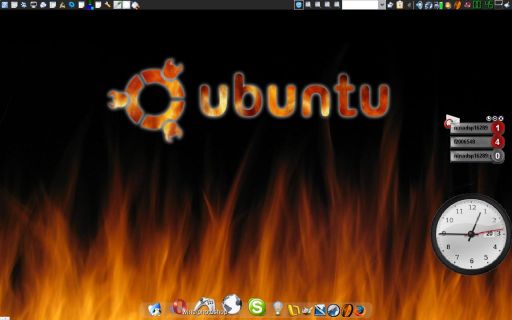 And yeah, I also found out how it is to not eat in the mess consecutively for almost an entire week, and I realised, that mess rocks, no matter how bad the food, as everything gets taken care of in the mess bill, as against the constant out flow of cash from your wallet, which can be very depressing at times.

It’s getting late, and I don’t want to be late for my date with dang tomorrow morning, in the lab. Till tomorrow, so long! :)