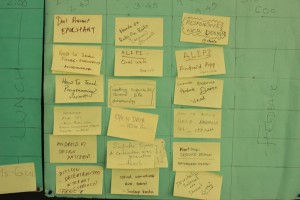 Barcamps have traditionally created their schedules with Post-it notes and chart paper. This is a very enticing idea, and is extremely simple to implement. However, this has a few logistical implications. Barcamp Bangalore had been struggling with the following:

This topic came up in the BCB 11 feedback session, and me and Aman Manglik put in our two cents with everyone else. As with most other events, we left it at that, and went back home. BCB12 planning started, and we decided to go and meet the people behind the scenes (If you don’t already know them, they’re pretty cool fellows. Amit Khare a.k.a. Daaku, Sathya, Saurabh Minni, Mixdev a.k.a. Arun Vijayan and a few more). We brainstormed (a lot!), and finally decided to move the whole scheduling from the humble chart paper to the mighty web. Everyone in the team had their own tasks, so me and Aman decided to pick this up and give it a shot. We finalised our feature set to:

I took up the front-end, Aman took up the back-end. The result of this was a bare bones schedule generator written by Aman, which fed this information to Saurabh’s Barcamp Bangalore Android App as well as my schedule display. I chose to use node.js and hacked together a set of pages which displayed the schedule, and the announcements and twitter updates on another page. The result: 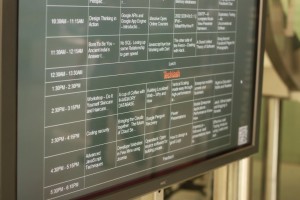 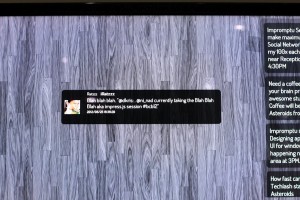 The poor thing broke right when it was most needed, on BCB12’s morning, right after the schedule was generated. I had to restart the node.js server to get it back up on it’s feet, all thanks to me missing out an edge case while using arrays :/. Thankfully, the server did not stutter later, and everything worked fine for the rest of the day.

With BCB13, I had some more time to work on the code. By this time, I had a better understanding of node.js as well as a few other concepts. I almost completely re-wrote the server side code and removed most of the delays caused by reading and writing of files (yes, I store the schedule and announcements locally in a JSON). I also had to pull out the underlying library and replace it with another one compatible with Twitter’s API v 1.1. The date of deprecation of the 1.0 API was dangerously close to BCB13’s date and I did not want to take any risks. I spent some time adding support for media entities, added handlebars.js for templating, let moment.js do all the heavy lifting for time and some more fine tuning. The schedule page did not receive as much attention, as it worked fine. Express.js, socket.io, jmpress.js and jQuery still remain a part of the project, and I may keep it that way for the foreseeable future.

My current TODO list for this project includes the following ideas, in no particular order:

Time for bouquets and brickbats. If you attended either of BCB12 or 13, and saw these screens, tell us what you think about them please?