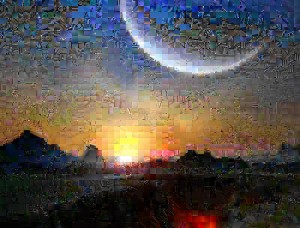 For all those who had visited this year’s Oasis Room of the Photography Club, one of the most interesting peices on display was the Mosaic made by the Club members. So, here’s a sneak peek of the making of the mosaic…

Every year, the Photography Club sets up an exhibition of photos clicked by it’s members as well as by other participants in the ‘Exposure’ competition. The centre of attraction in this exhibition is the collage made out of last year’s photos. This year, everyone wanted to raise the bar, and after a lengthy, and very hilarious brain storming session (with 2 of our members locking horns over the anatomy of the human digestive and respiratory system), we finally came up with a mosaic of last year’s photos.

Then followed 3 sleepless nights, where Aman (with a little help from your’s truly) worked on generating the entire mosaic on the computer, in a soft copy. Google and Wiki were our tools, and we found a gem by the name of ‘Metapixel’, a mosaic generator for Linux. 280 photos from last year, were cut down by a software written by Aman in Java and using ImageMagick, to 1×1 inch square peices, to give approximately 13500 photos. This task took about 2 hours of heavy processing on all of the 3 laptops being used. CPU Temperatures soared to 80 C!

Next, the images were fed to Metapixel, which indexed all the images, and gave each image a score based on the colour content of the image. Then came the ‘trial and error’ phase, where we tested out mosaics of almost 30 different images, which helped us understand how Metapixel works. Finally, after almost 3 nights of sweating it out on the computers, and 2 hours of heated discussions, the above image was chosen as the final one.

This was the easy part! After this, ALL the Club members got their hands dirty and started cutting photos from last year’s exhibition. The major difficulty in the entire process was keeping track of all those small peices, making sure that they don’t mix up, and go in the wrong place on the mosaic. Members devised a customised ‘Bucket Sort’, to make sure that everything went smoothly. After al the 1900 peices (which were to be used in the final mosaic) were cut (about 2 1/2 days of hard work), grids were drawn on a black chart and people started sticking the peices to their rightful places. The Mosaic was finally shaping up. :smile:

Work continued on the Mosaic till the day before Oasis, and after all the peices were stuck, it was manually inspected for any mismatches in colour. Surprisingly, there were very few peices that were wrongly placed. Kudos to both, Metapixel and the Photog Team for getting it spot on! The rest, as everyone knows, is history. Photog did raise the bar…